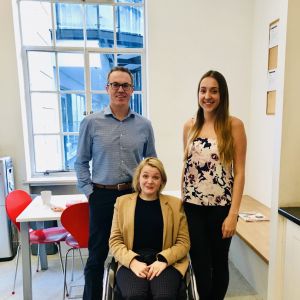 Work experience at The Climate Group

This October half term, I went to London to partake in some work experience with an organisation called The Climate Group. They advocate for people to take climate change seriously, and they help them to understand the dangerous situation that our precious world finds itself in. Carbon dioxide concentration is currently almost 48% above pre industrial levels. Sea levels are rising 3.3 millimetres per year. This year, the government of the United Kingdom declared a climate emergency. The government has been facing a lot of pressure from groups like Extinction Rebellion.

The people at The Climate Group took the time to inform me about various campaigns they are running, for example, RE100, where they are looking for big businesses and corporations to use renewable energy within their companies. A group of countries have joined the Under2 Coalition, where governments commit to keeping global temperature rises below 2 degrees Celsius. The Climate Group gives climate change expertise to help governments reach this goal. EV100 promotes use of electric vehicles by these companies.

I sat in on a meeting whereby the CEO and other members of the organisation discussed future goals for The Climate Group. The organisation liaises with their colleagues, which are situated throughout the world. They do this using Skype for Business, to avoid travelling and emitting carbon dioxide into the atmosphere if they used aeroplanes to travel around.

Coincidentally, my work placement took place when a significant annual climate change conference, COP25, was cancelled in Chile, due to anti government protests taking place, which initially began because of rising prices of Santiago metro fares, but developed into being about other government issues. The conference was moved to Madrid and scheduled for the 2nd to the 13th of December.

I received tremendous support over the course of my placement. The meetings and conversations I had were arranged by Damian, one of the people who worked there, and quite frankly he was amazing: very supportive and very knowledgeable. He helped to enlighten me on how terribly serious the climate emergency is.

It’s an ecological crisis. Our planet is being burned. Our precious home is being destroyed, and once it’s gone, it’s gone. Forever. Greta Thunberg, who is quite frankly my hero, said something I will never forget- ‘I want you to act as if the house is on fire, because it is’. It’s true. It is. I urge everyone reading this article to do anything they can for the environment, whether it’s cutting down on meat, like I have done, or even just making a conscious effort to turn the lights off in your house, which I also ensure is done in my house. Anything will make a difference. Around two hundred beautiful species are becoming extinct every single day, because of the sheer environmental catastrophe that our world is facing. In my opinion, solving the climate crisis should one of the top priority of any government. Before Brexit. Before the economy. Before punishing criminals. Our world will not be here for much longer if we do not act.

What is my view on the violent method of protest used by Extinction Rebellion, you may ask? I think that they have a very good point, but I absolutely do not believe that violence should be used. You cannot advocate for protecting the planet if you cannot protect and be decent towards your own race. It’s just hypocritical.

Still, I think we are stepping in the right direction, I just think we need to put everything into fighting the climate crisis.