I've graduated from Birmingham University with a first in Political Science. I studied a really wide range of modules from International Relations theory to the politics of the environment and also looked at gender and sexuality. I completed my dissertation on the politics of the Middle East: how do UK-Saudi Arabia relations undermine conflict resolution in Yemen and Iran?. I have secured a job working in the SEN/EAL departments of a Birmingham school which I am now in my second month of and I'm really enjoying the experience. It's confirming to me that I definitely want to work with young people in education and maybe even specialise in supporting students with SEN.

I've been thinking quite a bit about Hanley recently and what a supportive environment it was to be in as a student, particularly coming from a background that was a bit rocky now and then. The teachers inspired me to go into teaching and I'm excited to train towards becoming the kind of positive influence on young people that helped keep my prospects open to me when I was moving through school and beyond. 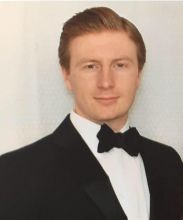 Jack Sharman is in the midst of a medicine degree at Birmingham and is currently taking a year to intercalate in clinical anatomy. He is hoping that this will give him an edge over the competition when applying for neurosurgery training positions in five years’ time. Moreover, he’s also designing an app to make the lives of students and doctors more efficient by automating the process of organising teaching.

Charlie Sprang graduated from university with a degree in chemistry. In his third year, he researched negative thermal expansion materials and their use in the medical, and mainly dental, industries. He then took part in a Pareto law assessment day and found himself in the top 0.5% of the candidates which secured him a job at Atos, a global leader in digital transformation. He’s now working on securing deals with up to £5 million and is thoroughly enjoying the new challenge.

I graduated from Nottingham Trent with a first in Criminology and have joined the RAF full time in he role of a Flight Operations Officer (basically planning the routes for aircrafts and travelling to different countries to gain diplomatic clearances for the aircrafts!)
I started my Initial Officer Training back in August and it will last for 6 months! After that I should specialise into my flight ops training, and then I get deployed after another 6 months.

I am currently completing weapons training and CS Gas training (with respirators) with the RAF regiment! 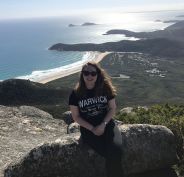 Despite leaving Hanley almost four years ago, I have been able to continue and develop many of the extra-curricular activities I began there. Since completing the Holocaust Educational Trust’s Lessons from Auschwitz Project in year 12, I have become a Regional Ambassador for the charity, a role within which I have been privileged to work alongside survivors of the Holocaust, hear from eminent historians and expand my knowledge through a study visit to Yad Vashem, Israel. Experiences such as these have continually renewed my motivation to ensure that we remember and learn from the Holocaust and its ongoing contemporary relevance. Alongside my history degree at Warwick University, I have organised numerous Holocaust Memorial Day commemorations: survivor testimonies and guest lectures, an exhibition at the Modern Records Centre, and a university-wide ‘Pledge Against Prejudice’. In addition, I have worked with the Holocaust Memorial Day Trust, as a member of their Youth Board, delivering workshops across the country and overseeing the implementation of an online workshop during my tenure.

Likewise, through Warwick’s many volunteer programmes, I have continued the classroom volunteering I began at Hanley. ‘Right to Read’, Student Tutoring, and Widening Participation have enabled me to work with students in local schools, supporting their academic progress and changing their perceptions of university to something that is attainable for them. Yet, my volunteering has not been confined to the local area: during my first year I spend six weeks teaching grade 11 English in a South African township school, through the Warwick in Africa programme, whilst this summer I volunteered at the Laksh Foundation, and educational NGO in India, helping teachers to develop the curriculum and employ engaging and interactive teaching techniques.

University has also presented many other exciting opportunities alongside my degree. My involvement in Warwick’s Raising and Giving (RAG) Society has sustained my dedication to fundraising, sparked by my involvement in the Charity Committee at Hanley. In 2016 I trekked to Machu Picchu, individually raising £3000 for the Make-a-Wish Foundation, through sponsorship, fundraising events and street collections. The following year, as Warwick’s Three Peaks Challenge Leader, I led a team to fundraise over £20,000 for Meningitis Research Foundation and climb Ben Nevis, Scafell Pike and Snowdon in just 24 hours. As Head of Operations for Jailbreak Society, I also led the organisation of the annual ‘LOST’ charity hitchhike event, which raised £5000 in one day - the most successful in the event’s history. Currently, I’m leading a team that will take on the challenge of summitting Kilimanjaro next year, whilst aiming to raise over £100,000 for Meningitis Research Foundation in the process.

However, the international opportunities I’ve been fortunate to take advantage of at university have not only been extra-curricular. Last year I secured a place to study at Monash University, Melbourne, where I gained new insights and academic perspectives that I have been able to bring to my dissertation this year. I also learned about indigenous history and its inextricable link to contemporary social issues, both in the classroom and through my travels around the continent.

Going forward, I hope to harness the diverse international experiences I’ve gained and the transformative power of education to empower young people to overcome social injustice and adversity. In September 2019, I will commence Teach First’s graduate programme, teaching secondary school maths whilst working towards my PGDE qualification. I could never have secured a place with one of the country’s most prestigious graduate employers without the unwavering support, guidance and encouragement I have received from the staff at Hanley and Warwick, my friends, and my family, to all of whom I am incredibly grateful and hugely indebted. 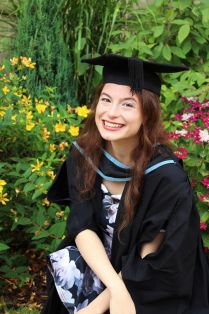 For the last three years I have attended the University of Birmingham, studying for a BA in English Language. Last summer I finally made it – I graduated with a first class degree! Going to university is one of the greatest achievements of my life, not only academically but personally.

Never one to be inconsistent, I have stayed at the University of Birmingham, this time completing an MA by Research in Applied Linguistics. This is a full year of completely self-taught study, preparing me for a career in research and academia.

Based on my work this year, I have recently been offered the incredible opportunity to join the Out Of Our Minds research group, with whom I will be undertaking a fully funded PhD placement starting this September! The "Out Of Our Minds" group is working towards improving the teaching of foreign languages in schools, using linguistic, psychological and computerised techniques. I cannot wait to embark upon this next stage in my academic journey.

My time at Hanley was one of the happiest periods of my life. I felt appreciated as a person and well supported academically. I really want to thank Hanley for its encouragement throughout my GCSEs and A-Levels in particular. 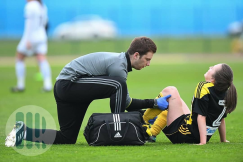 Upon leaving Hanley, I went on to study BSc (Hons) Sports Coaching at the University of South Wales. It was during my third-year placement at Cardiff City FC - working as a goalkeeping coach for their women’s team that I became the team’s pitch-side first aider. My experiences, including treating an opposition player with a suspected serious neck injury, confirmed that I really enjoyed the medical side of football, and as a result I applied for a Masters degree in Sports Therapy, which I am currently studying at the University of Gloucestershire. As an avid Cheltenham Town fan, I was delighted to secure a position with Cheltenham Town Ladies, playing in the FA Women’s National League as their Head of Medical for the current season. My role includes pre-and post-match treatments such as massage, taping and strapping, as well as injury cover during games. Following a player getting injured during a game, it’s then my job to rehabilitate that player, help them recover from their injury and return them to playing and training. It’s a hugely challenging role, and not the most glamourous job, but it’s easily the most rewarding thing I’ve ever done. In the future, following my graduation, I hope to continue my work and gain employment in professional sport, so in a few years’ time when you’re watching a game on TV and a player gets injured – watch out for me! (I’ll be the one running on with the ‘magic sponge’!) 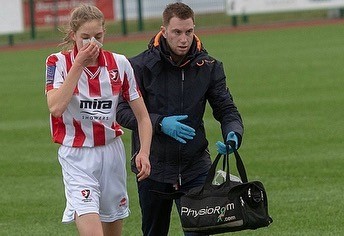