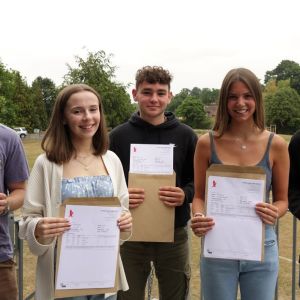 This remarkable cohort of dedicated and hard-working young people were the first to sit external exams since the pandemic. They bucked the national trend to produce even better results than the school’s teacher assessed grades of 2020 and 2021.

An amazing 37% of all grades were awarded at A* and A grade, while almost 70% of grades were Grades A*-B.

Hanley Castle’s exceptional Head Boy, Ollie Cooke, was the stand-out performer with A* grades in chemistry, maths, further maths, physics and his extended project. Ollie is off to France today for a celebratory holiday before taking up his place at Trinity Hall College, Cambridge to study Natural Sciences.

India Southwick is also celebrating an exceptional set of results. India gained three A* grades in chemistry, mathematics and art. India is now off to Nottingham University where she will be studying Architecture and Environmental Design. Her choice was influenced during an Open Day when she was particularly impressed by the work of students already on her chosen course.

Noah Wroughton also gained a magnificent set of results, with A* grades in English literature and history, and an A grade in Economics. Noah has exciting plans for the next year, visiting relatives in New Zealand and earning some cash before taking up his place at Warwick University to study history. Noah puts some of his success down to some wise advice from his dad: ‘When revising, prepare for the worst, but hope for the best!’

There is now huge excitement ahead as students begin preparations in earnest for taking up their places at a wide range of top universities, including Cambridge, Durham, Bath, Exeter, Bristol and Warwick.

Of course, university is not the only route for successful high-flyers, and more students than ever will be embarking on degree or higher level apprenticeships with some of our very best local and national employers, including QinetiQ.

Preliminary analysis, using 2019 measures, suggests that value added will be at least +0.22. This is significantly better than the national average and comparable with top performing sixth forms across England which impose far more stringent entry criteria
Headteacher, Lindsey Cooke, commented:

‘I know that I am speaking on behalf of all members of staff at Hanley Castle when I say that we are full of pride for our talented, dedicated and committed Year 13 students. They are young adults who have demonstrated great resilience and accomplished great things in the face of a prolonged period of unprecedented challenge.

We are proud of every student and every grade. This was a year group with a million good excuses for not achieving top results. However, instead of sitting back and feeling sorry for themselves, they have responded in the most magnificent manner. They have taken long periods of remote learning, illness and disruption in their stride, and delivered the most magnificent set of results we could ever have imagined. We would like to congratulate each and every one of them for achieving so much in the face of sustained adversity.’ 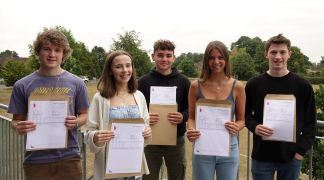 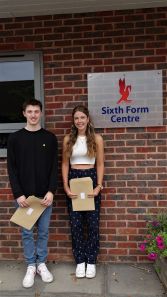 We are making some last minute changes t...