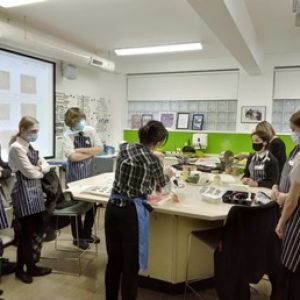 Last week, Y10 Food and Nutrition students had the opportunity to visit the University of Worcester.   They have provided some excellent reports on what sounds like a great day.

Jodie Hancock
Students at the University of Worcester invited a selection of year 10 students to an international food skills day. It was a great opportunity for us to develop general skills within the kitchen, for example, teamwork and organisation as well as abilities useful to our NEA tasks later in our GCSE course. These include time management, cooking techniques and culinary skills.
This was evident in our use of a whole chicken, which we deboned and sectioned for use in further dishes. We were also educated on food waste as the chicken carcasses and scraps were transformed into an amazing stock. This was again used within our recipes practiced.
The theme of the workshop was based upon dishes of the commonwealth (of which the games are upcoming). We were educated on the countries /cultures within the commonwealth and national dishes in an informative introductory PowerPoint. This was accompanied by a range of interactive tasks to share our knowledge and ideas. This allowed us to interact with the students creating a friendly and welcoming setting.
We were working in pairs to make the following dishes. Singapore chicken bao buns; chicken, bacon and corn chowder from Canada and chicken tikka masala with naan from India. Each of these dishes were thoroughly demonstrated by the experienced students and they were there for assistance and help along the way when we came to making the dishes. The kitchen environment was well looked after and spacious and made a lovely change for us to experience cooking in.
We all really enjoyed the trip and a big thanks for the team involved in organising this experience for us. 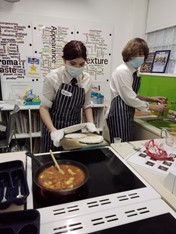 On the trip we started off by learning about the commonwealth games, we were shown a presentation and a video and learnt facts like how there is 54 countries that take part in the Commonwealth Games. This year in 2022, Birmingham will be hosting the commonwealth games. Throughout the day we made 3 dishes of countries that are included in the commonwealth games. First, we were shown the meal plan of the day, and lead to our kitchens. We were then shown how to portion a chicken (separating the meat from the bones). After we had cut the chicken, we were then going to start to make bell buns with five spice mince filling, which originate from Singapore. Our next dish was chowder, which originated from Canada, it included chicken, bacon, and corn. Our last dish we were shown how to make was Chicken Tikka Masala paired with naan bread this dish originates from India.
A key skill we will use is how to portion a whole chicken to make 2 drumsticks, 2 thighs, 2 breasts and 2 wings.
Some of our favourite things to do on the trip was, learning about the countries that participate in the commonwealth games, and tasting all the delicious dishes we made.

Lucy Goulding
On our trip to university of Worcester we learned multiple skills like how to debone a chicken. We learned about the history of the commonwealth like how there are 54 countries in it.we also learned how to deboned a chicken and how to make chicken bacon and corn chowder, crispy steamed buns with 5 spice mince filling, chicken tikka masala with naan bread. I never knew how to fully debone a chicken or make chicken tikka masala or steam buns. I also never knew that so many countries were in the commonwealth like Tonga. I quite enjoyed making the chicken tikka masala even though it was the hardest as its hard to tell when all the chicken is cooked. 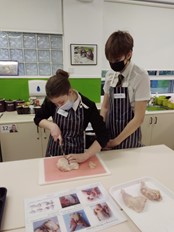 On the day trip to Worcester university we learnt a lot! The first thing we got to do was portion a whole chicken this was very interesting and overall an amazing experience that I will most definitely use later in life. What we did was we split the chicken into 2 drumsticks, 2 thighs, 2 breasts and 2 wings (and waste parts what were boiled down into stock) which we later used in the other practical’s that we did, this include my favourite thing we made; 8 crispy steamed bao buns! this was a very fun recipe as we got to make a dough and experiment with spices from other cultures (Chinese five spice) we learnt that this recipe originated in Singapore because we were focusing on the commonwealth games that are going to be hosted in Birmingham this year, the buns tasted amazing and as it was one of our first recipes we got to eat them at lunch time. Another recipe that we made was chicken tikka masala and a naan. For this activity our groups had to split up so that one person focused on the curry and the other on the naan, I was chosen to work on the tikka masala which I was a bit anxious about because it involved a lot more steps that the naan. However the instructors were very helpful and I ended up with a delicious red curry. My friend made the naan and I had one for dinner the next day and it was delicious. Yet another recipe that we made was a chicken chowder (using the chicken we portioned) this recipe looked amazing but as a very fussy eater I didn’t really like the taste however my family gobbled it up so I’m guessing that it tasted really nice. Whilst making these dishes we learnt all about the county of origin and their involvement in the commonwealth which was very interesting. I had an amazing day and am so glad that I got to go and have this amazing experience.

On Tuesday the 25th January, we went on a trip to the University of Worcester for an NEA 2 inspiration day/ practical workshop. We made a range of international dishes inspired by the countries participating in the commonwealth games, to celebrate the growing diversity and culture in the United Kingdom. We started off by learning how to debone a chicken which was an excellent opportunity for us to practice and enhance our practical skills for things such as food practical exams. We used the different parts of the chicken to make the three dishes that we made. These were: steamed buns with five spice mince filling, Chicken, bacon and corn chowder and Chicken tikka masala with naan. It was a very enjoyable day and a great way to gain some first-hand experience with more complicated preparation skills when cooking food.