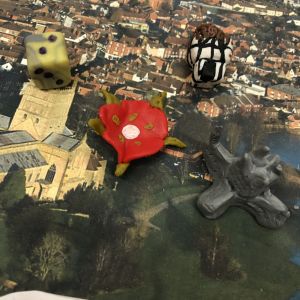 Each year, the Humanities faculty takes the whole of Year 7 to Tewkesbury over two days to learn about some aspects of the geography, history and religion of the town. We are always welcomed by the wonderful John Moore Museum who not only run both of the history sessions, but also provide space for pupils to learn about the impact of the 2007 floods and the situation of the town in the local environment. Tewkesbury Abbey allows us to take tours of pupils around the vast building picking out some of the more obscure features including the 17th century carving of a dog (apparently etched by the son of a vicar whose mind had wandered during a particularly long sermon!) and the room where Lancastrian soldiers were butchered following the Battle of Tewkesbury.

Following our trip, Year 7 are set the challenging task of creating a project using the information gleaned from the day and to create something original and packed with interesting information. This year, the Year 7s have produced some extraordinary pieces of work and are a credit to the enthusiasm they have shown since starting at Hanley in September. It is always difficult to choose winners but the Humanities faculty have narrowed down the entries to their favourites.

The honourable mentions are for those project that just missed out on the top spot but were so good that they need mentioning. Zach Lloyd-Rumens created an incredibly professional leaflet about Tewkesbury covering a wide variety of topics within the subject areas of geography, history and RE. His layouts and eye for detail certainly made his project stand out. Similarly, Fraser Tyrrell produced a wonderfully detailed PowerPoint presentation on Tewkesbury illustrating the depth of research he had undertaken to complete the work. Keziah Jacques-Abdi created an impressive version of Who Wants to be a Millionaire which not only contained a wide variety of challenging questions, but was also interactive such that the pupils who played the game began to feel as if they were in a studio about to win real money. Alas, an honourable mention will have to suffice!

As for the winners, in third place is Harrison Cale’s film about Tewkesbury. He is lucky enough to own a green screen and made full use of this in the video during which he shares information about the town whilst the backgrounds show off images collated from the trip. His presentation was deemed to be excellent and the range of information included, in addition to some tricky editing, made his project stand out.

In second place is Marcus Charman’s superbly presented and original board game called Theocsbury. Whilst the premise is simple, pieces move around the board to reach the final box before anyone else, it is the attention to detail that really stood out. The board is covered in coats-of-arms from the various families in Tewkesbury and the families that fought at the Battle of Tewkesbury (often paraded during the annual Medieval festival) and there are a huge range of questions, forfeits and bonuses. Marcus has brought his eccentric sense of humour to the game with forfeits based on stories from Tewkesbury from across the centuries.

In first place for 2019 is Beth Hoskins who also produced a board game – a theme that emerged with some of the entries this year – which certainly tests the knowledge of Tewkesbury for those who play! Not only did Beth create a large number of question cards, varying from multiple choice and true/false questions to challenging you-know-them-or-you-don’t cards, but she also made playing pieces of features of the town she had seen on the trip. Players can choose from the abbey, a horseman, a Tudor building and the Tudor Rose; creativity that the Humanities faculty was very impressed with. 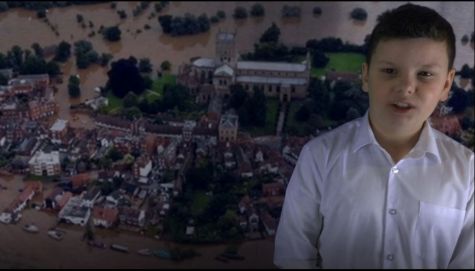 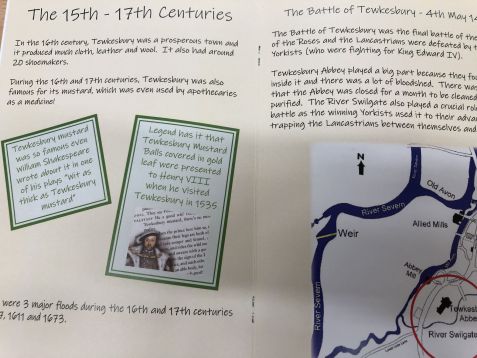 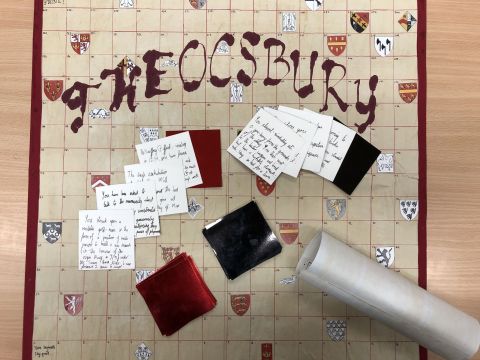